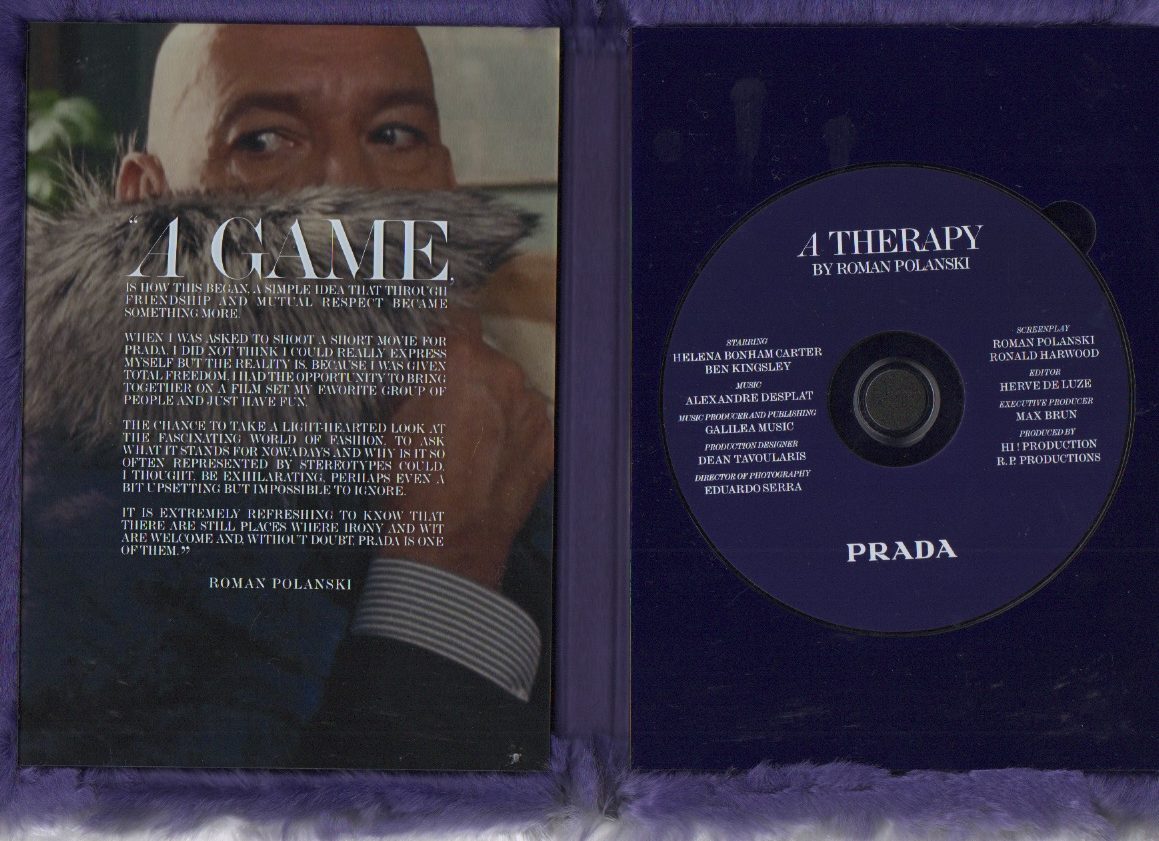 A Therapy by Prada

A woman enters the room. She’s here for therapy. While the woman talks, laying on the sofa, the therapist’s eyes turn to her coat, again and again until he finally stands up, touches it gently and puts it on. „A therapy“ was directed by Roman Polanski and published in 2012.

A boy with an Elton John shirt is laying on the floor, next to several vinyl records. In the next scene he puts on his boots, grabs his bag and runs over the street to a bar, where he enthusiastically begins to play Pinball, with several people around him cheering. But, was it only just a dream? The Gucci DIY Campaign film was released in 2018 and directed by Alessandro Michele.

Collina Strada, the emerging New Yorker designer brand creates a surrealistic experience with her fashion film, presented on the digital Gucci Fest in 2020. In the setting of a video game with elements like the chat from the biggest gaming platform Twitch, she seems to take the viewer to a different dimension. The film was published in 2020.

The Balenciaga Fall 2019 collection as seen outside. Don’t we all dream of a scenery like this sometimes? The video is made by Jean-Pierre Attal and was published in 2018.

Harry Styles is on his way to get fish and chips with a chicken under his arm. ‚Michelle‘ by the Beatles plays in the background. The Gucci campaign was published in 2018 and is directed by Glen Luchford.

Inspired by a Soviet film called „Office Romance“, Shushu/Tong presented its Autumn Winter 2020 collection with a retro vibe while mimicking vintage furniture and the decorative styles of the Victorian era.

„Run, don’t walk!“ – in this Miu Miu x Mytheresa short film directed by Danny Sangra, two women are finding their love for synchronized swimming while fighting the fear of sharks.

The Thebe Magugu SS21 short film is inspired by a series of interviews conducted by Thebe Magugu and confessed female ex-spies who worked for and against South Africa’s Old Regime. It launched during Paris fashion week in September and was directed by Kristin-Lee Moolman.

Gucci’s Ouverture Of Something That Never Ended (Episode 1)

The seven-episode mini-series which was co-directed by director Gus Van Sant and Alessandro Michele launched during the film and fashion festival GucciFest earlier this year. „Ouverture Of Something That Never Ended“ tells the story of Silvia, her friends and new acquaintances.

Camper Together With Eckhaus Latta – F/W 2016

In 2016, Eckhaus Latta and Camper launched not only the joint collection „Together“ but also the short film „Island“ which was short on Mallorca.