Usually, the living room is empty during the day. Enrico Vespaziani’s flatmates are out, working, studying, meeting friends. It is in the evenings when they come together and gather around the dining table. Someone is cooking pasta pomodoro in the open kitchen, others are sitting cross-legged on the brown couch, drinking red wine out of water glasses, others are standing at the open window, smoking, while the floor under their feet is vibrating, as someone turned on the music.

This Thursday in March is anything but usual. The couch is hidden under a linen sheet, the table is pushed to the wall and the floor is covered with paint, fabric remnants, plastic foil, and scissors seem to be everywhere. It is the second week of the lockdown in Italy. Venice, which lays behind the stone-walls that frame the living room is intrusively quiet. It’s a cloudy day that seems to be in consonant with the mood of the people, sitting at home, not able to grasp yet, what the following weeks and months will look like. Enrico, who was supposed to be in the labs of the Università Iuav di Venezia, working on his first fashion collection, is bending on his knees, in the middle of the living room, the only open space with windows that give him enough light to work on the pieces he will present in two months.

“I wanted to project my fantasy of this tiny world. But it felt meaningless to be creative in this environment when everyone was suffering,” he says. 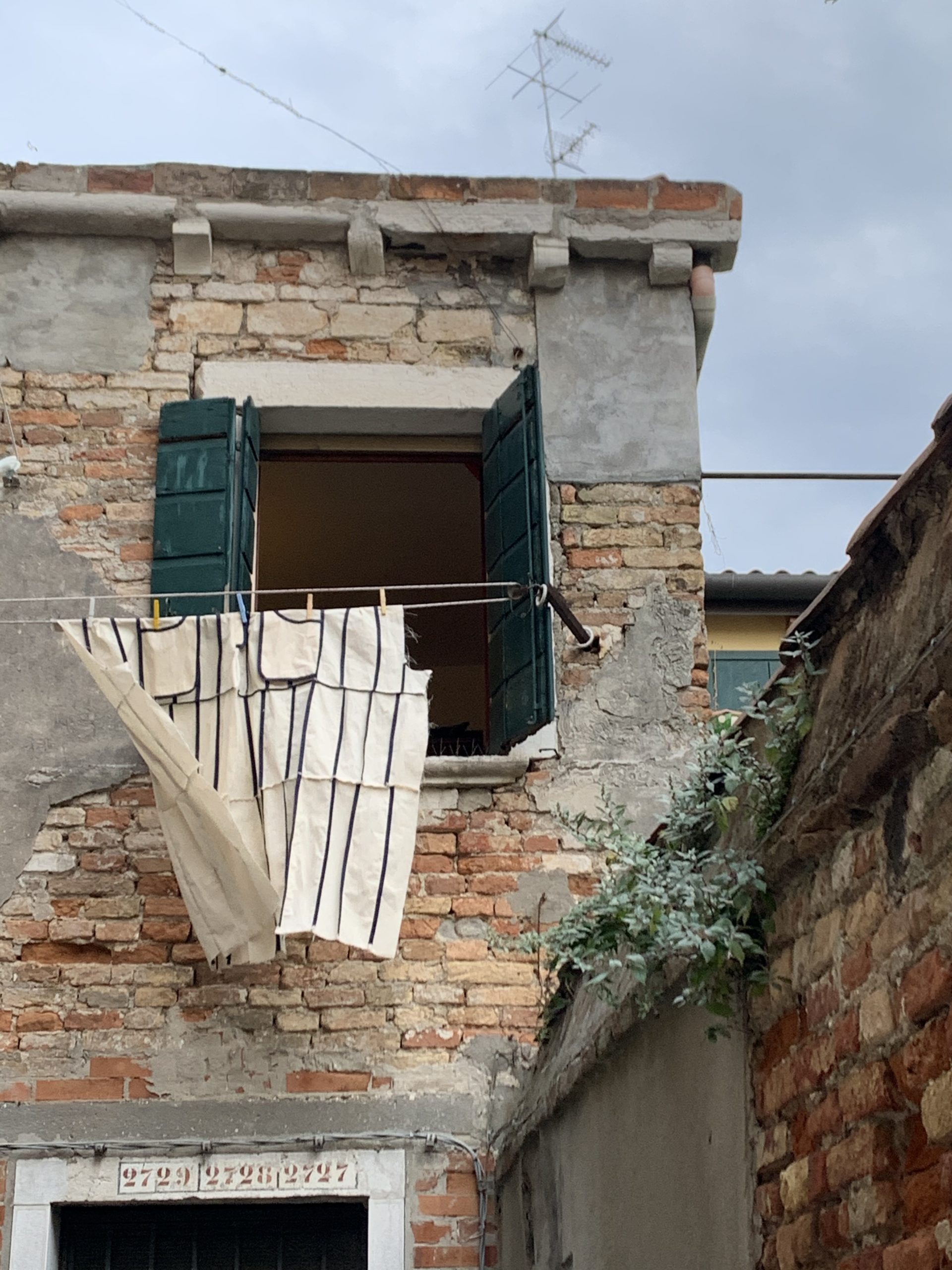 The students of Dr. Desiree Smal share similar experiences to Enrico. Dr. Smal teaches the Fashion Design program at the University of Johannesburg. When South Africa went into lockdown, the design students had to adapt to the new situation, forced by the new rules that came with the pandemic. “Take two garments apart, reconfigure it into something new. Tell us how that process was,” the professor asked her students, who were forced to stay in their rooms, most of them without access to a sewing machine. “It is the thinking behind it. The students became aware during that time that we do not only have to think about fashion in terms of new, but we can also reimagine what fashion could be like,” she says.

Only in 2017, when Smal began teaching, the program went through profound changes. “From a focus on skills only, we now have a social and a big environmental element to everything we do here,” she explains. Accordingly, the ways the students approached their work at home was led by a question that inevitably dominated their projects: How will they bring sustainable thinking to it?

Usually, you travel to different stores and fabrics to find different materials. Due to the situation, where people were instructed to practice social distancing, following the usual steps was not an option for Enrico. He was forced to rethink. “I realized that a lot of the materials I needed were part of the furniture in our home, like blankets and sheets,” he says. Looking for new materials, he also came across the plastic that was used to create barriers between salespersons and the customers in the shops. As many stores had to shut down eventually, these became useless during the lockdown. His ways of working changed over the time he spent in the living room. “I was using wax, looking at pigments, doing research on dying, and other more hand-crafted techniques.” After restrictions were loosened, it felt wrong to return to what he wanted to design before. “I could not change back, because I was too committed to my new ideas,” Enrico says. 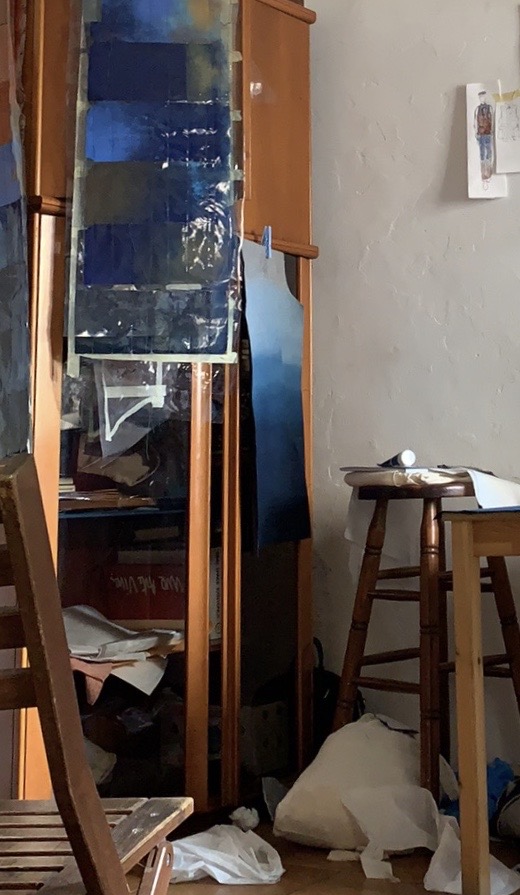 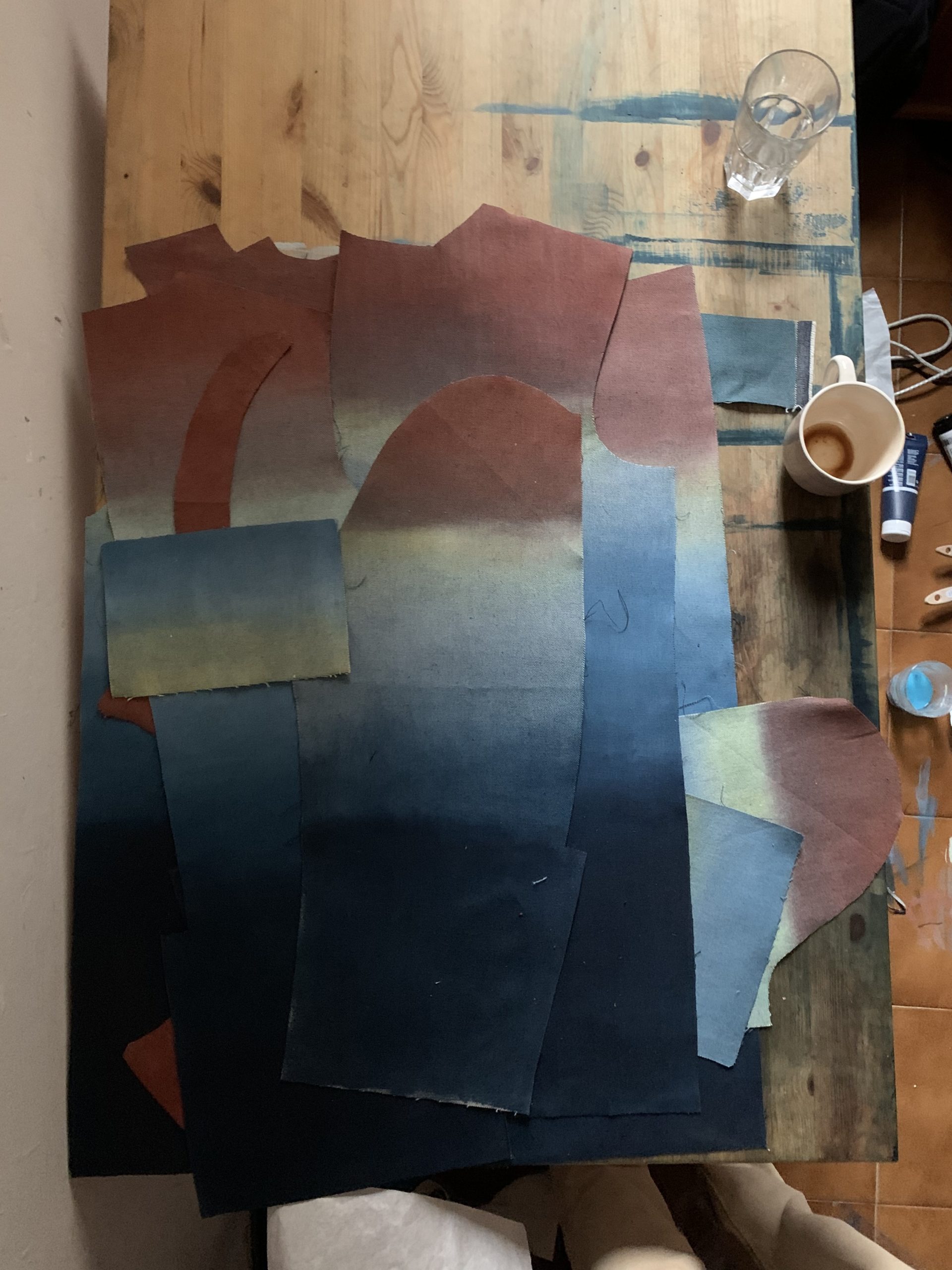 Outside the fashion students’ rooms, Taylor Brydges, a Postdoctoral Researcher based at Stockholm University and the University of Technology in Sydney, observed a development in the industry that went in the exact opposite direction. At first, her outlook on the future of fashion after the crisis was optimistic. This optimism was fueled by several events that preceded the outburst of the pandemic, such as the Ellen MacArthur Foundation putting out a report in 2017, demanding the industry to become circular; or the United Nations working on a “Fashion Industry Charter for Climate Action“ to achieve zero emissions by 2050.

Brydges focuses her research on the fashion industry and the circular economy. “Right now, we take raw materials, make new products, and very quickly these products turn to waste,” she explains. The question that underlies the idea of a circular economy is: How can we turn this linear system into a closed loop? “We turn old waste materials to make new products. We close the loop and take them back to the beginning of this system,” Brydges states. Nevertheless, the scholar did not feel that optimistic in April – and even less in June when she and her colleague summed up their findings and published them in the Journal Dialogues in Human Geography.

What they found was that brands were not changing their ways of working. Instead, they were making use of discounting to get their clothing out of the warehouses and stopped paying workers in factories that already produced the collections.

“Even in the face of bankruptcies, big retailers would just restructure and come back, really without learning any lessons from it,” the scholar says.

Already before the pandemic, the structures of fashion were under pressure to rearrange. The UN Conference on Trade and Development (UNCTAD) considers fashion the second most polluting industry in the world. The industry uses up to 98 billion cubic meters of water a year and is responsible for more carbon emissions than all international flights and maritime shipping combined, according to UNCTAD. Although the idea of a circular economy gained more attention, as of 2015, still only one percent of the garments we wear get recycled, according to data by the EllenMcArthur Foundation. “The technology to even sort fabrics and fibers and to reuse those products is just not there,” Brydges explains. “Most of the fast fashion products are also too poor of quality to begin with,” she adds. The discussion about fashion and sustainability usually focuses on the waste the industry creates – and lacks, according to the researcher, one decisive perspective: the people who are designing our clothes that we decide to throwaway – or keep.

She is not the only one who recognized this gap in the discussion. Anthony Kent, Professor of Fashion Marketing at Nottingham Trent University, together with his colleague, conducted a survey with 17 fashion designers in the UK as well as in-depth interviews with technologists and buyers, trying to answer the question: How are designers involved in the process of brands becoming more sustainable? The results they published in September 2020 in the Journal of Cleaner Production showed that particularly in large organizations, the designer tends to have a small, defined role to play: “Typically, they are told what to do,” Kent says. Nevertheless, he finds that their influence could be bigger.

“In the industry, the fashion designer is absolute supreme,” Kent states. “He is an important interpreter of fashion. So, he could also be an interpreter of sustainable fashion.” 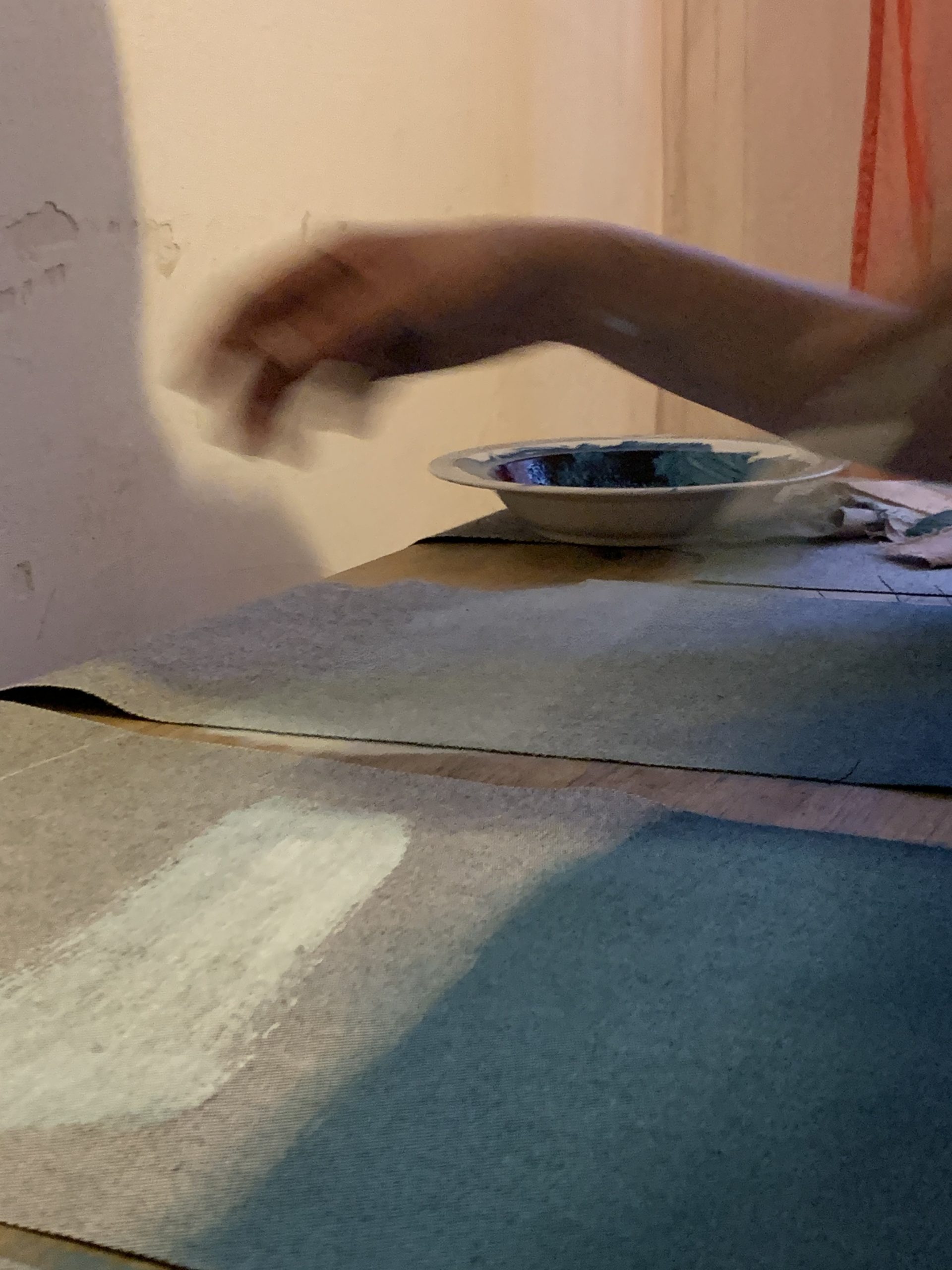 Inbar Kemp confirms what Professor Kent has found during his research: “The designer is like a tool of the company. The creative director sets the vision and the concept. From there on, you start to create.” She moved from Tel Aviv to Stockholm five years ago to work as a junior designer at H&M. Later, Kemp continued her work as a technical designer at Acne Studios. The overall problem for her lays in the structure of the system: “It works by season.” Nevertheless, the pandemic led to consciousness about this rhythm. In May, the head designer of Gucci, Alessandro Michele, announced on Instagram that he will “abandon the worn-out ritual of seasonalities and shows.”

Inbar sees a potential for change in the current situation. “The industry is based on new people, it is driven by the young,” she says. “Maybe this change will come from students, maybe this is exactly where empowering the designer will come from.” The Professor of fashion design, Dr. Smal, admits that this is nothing that will happen overnight. Nevertheless, she hopes that there will be a growing labor of consciousness. “If you are thinking, all these aspects: sustainability, social issues, using labor – suddenly become important.”

Fashion student Enrico eventually presented his collection consisting of blazers that transition from red to yellow to a dark tone of blue, a trench coat made from recycled plastic in shimmering white, a coat that looks like it had been alternately dipped into blue and white paint. He thoroughly changed his way of approaching design. The circumstances of the lockdown led to a more conscious approach to his work. Although this change will be anything but sudden, Enrico believes that if he and his peer students can move their new gained skills into the context of mass production, that “maybe there could be a revolution.” 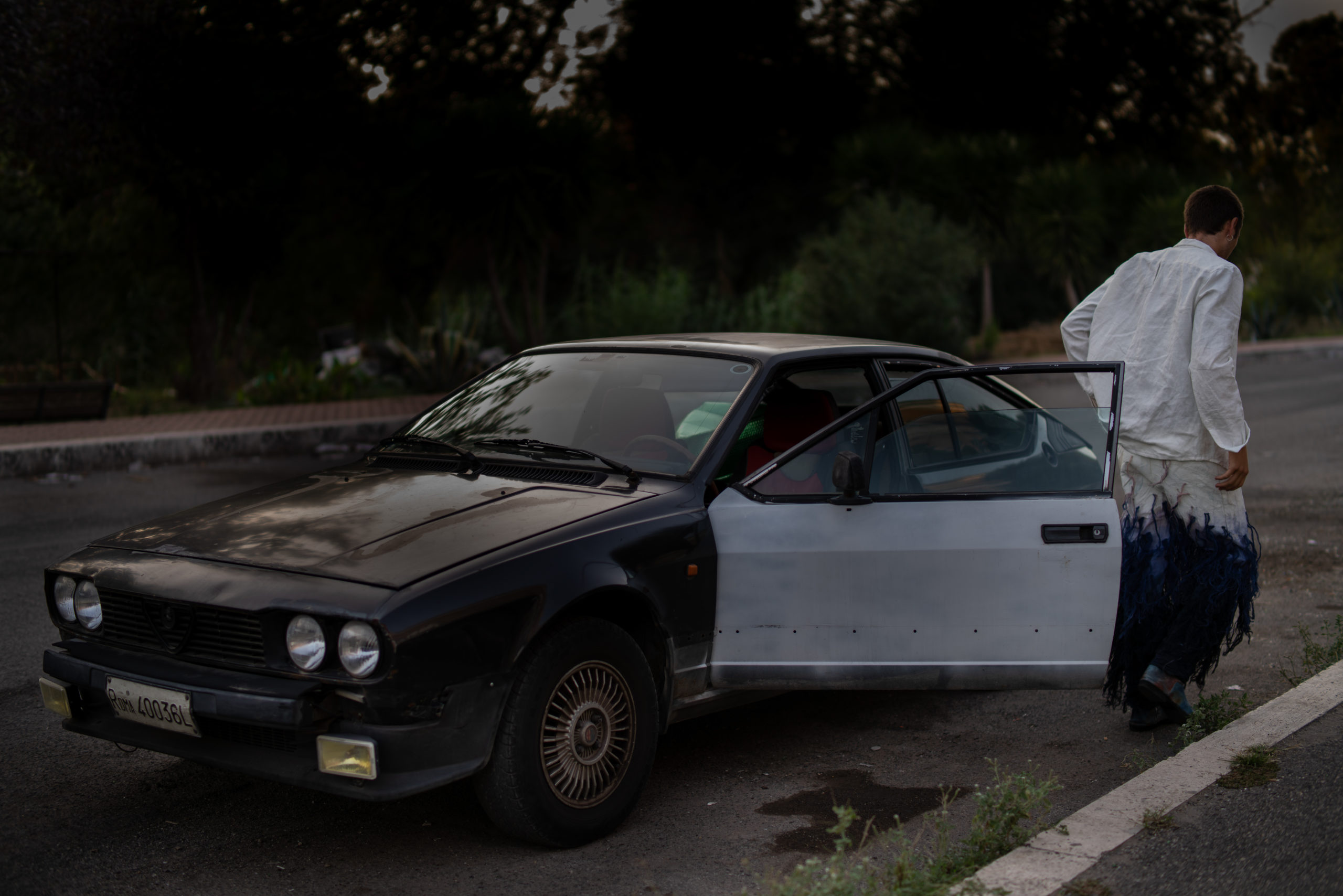 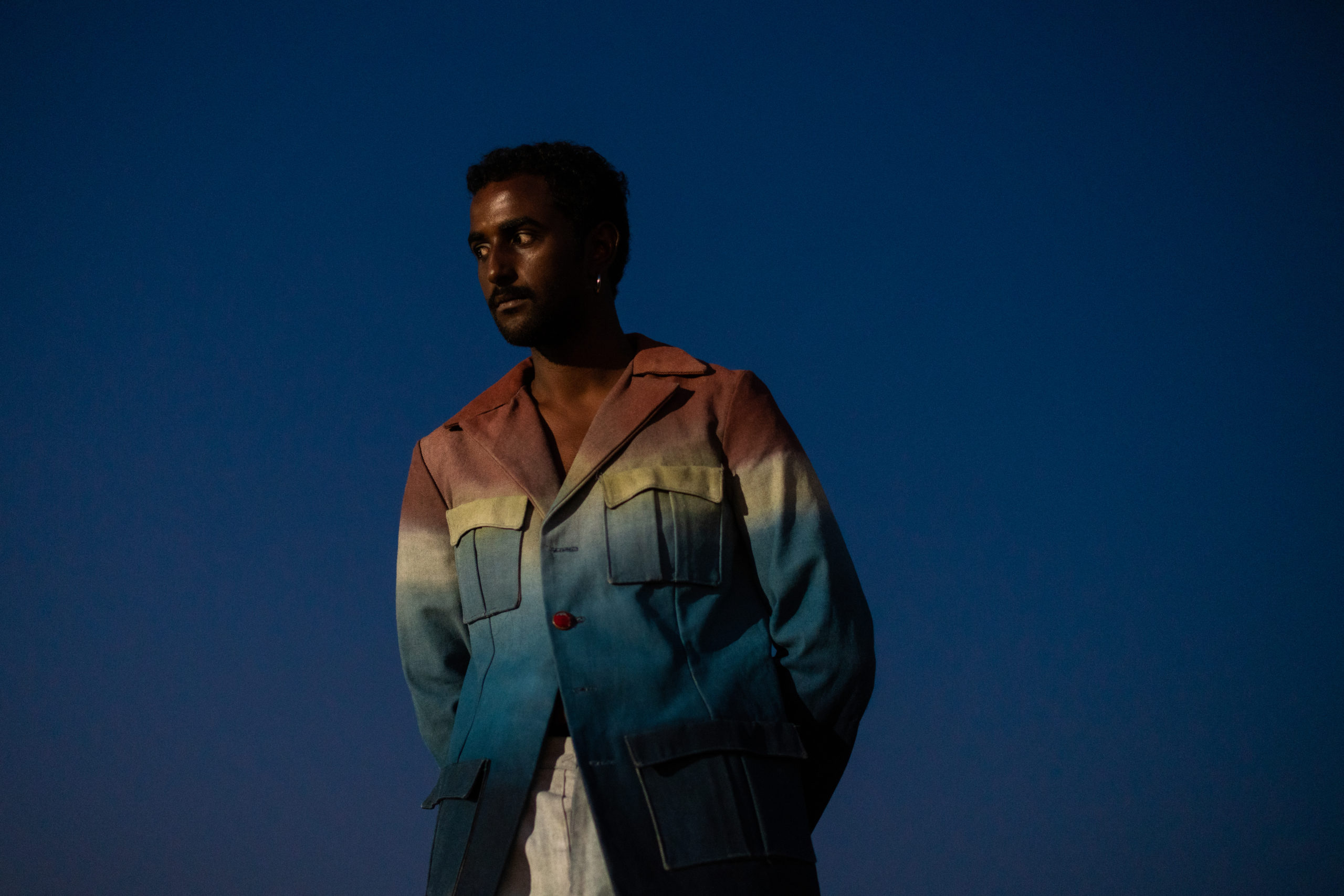 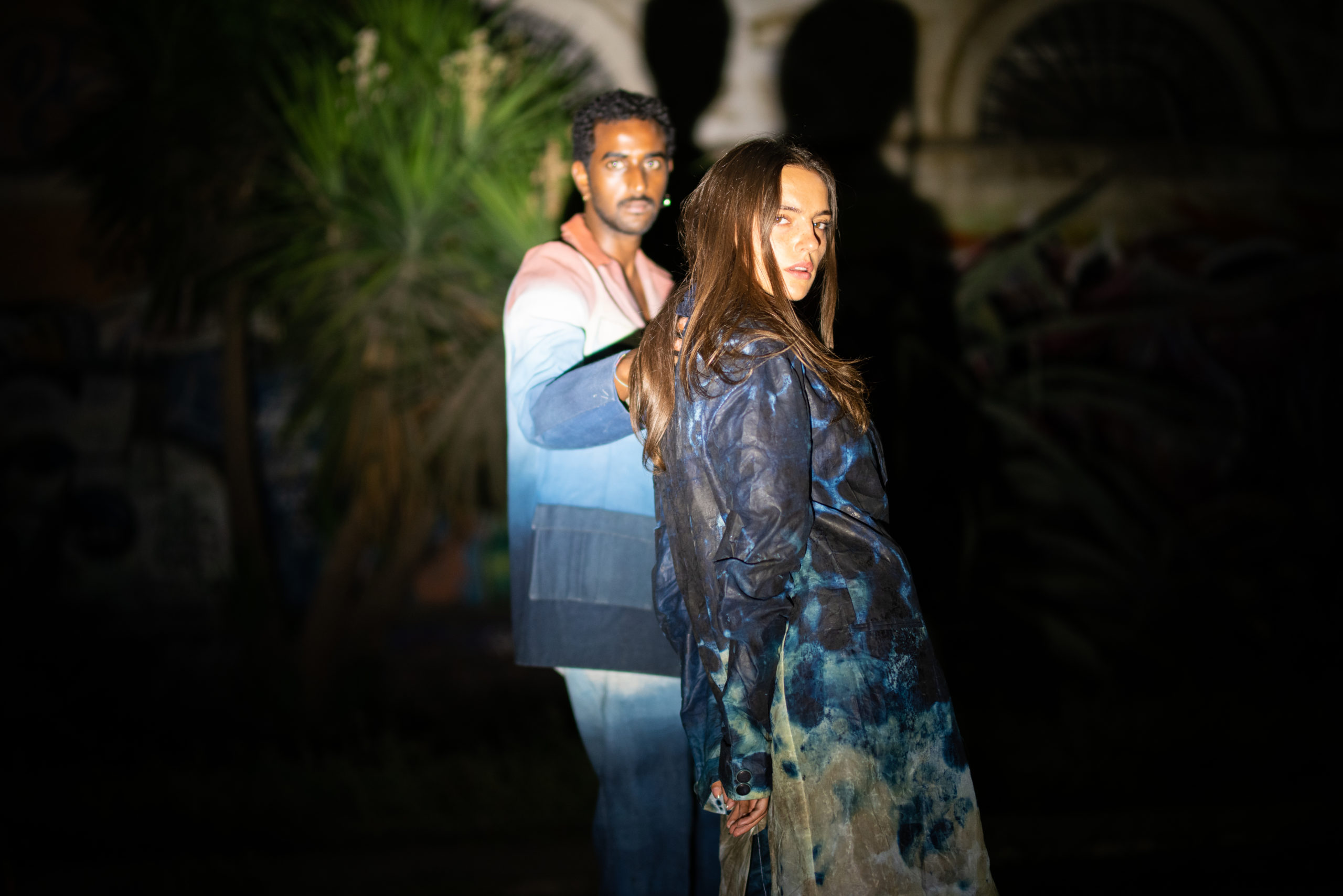 Summed up: Week 2 in Fashion on gentlemagazine.com

From Charles Jeffrey Loverboy to Simon Costin: In

‚What puts me in an imaginative dream-state is w

About Contact Imprint
We use cookies to ensure that we give you the best experience on our website. If you continue to use this site we will assume that you are happy with it.OK